skip to main | skip to sidebar

Anyone with the inclination to spend time on this blog agrees that NSSS (Nice Shiny Silver Stuff) is a key component, pun intended, of Gorgeous Cycling™.  The heyday of NSSS was the 1980's and into the early 90's - Campagnolo X-Record, Suntour Superbe, Maillard, Mavic, Dura Ace, the list goes on of premium top end, gorgeously polished bike parts available during that era.

While the outlook for new production of NSSS is a lot better than it was in the trough of the late 90's and early 00's, the mass production really is more centered on MSSS (Middling Shiny Silver Stuff), the sorts of things coming out of white label producers, largely Taiwanese, and retailed by the cycling equivalents of J Peterman.

Primo, i.e., NSSS, is more confined to boutique manufacturers such as White Industries, Paul Components, Phil, etc., while the majors - Shimano, Campagnolo, SRAM, tend to favor black or matte or anything but shiny silver finishes on many of their components.

This mourning is about Dura Ace hubs.  As the whole world, with the exception of my wife, knows, Dura Ace 9000 hubs will be offered only in black.

That means that the Dura Ace 7900 hubs must be the last of a breed - top end, shiny silver, cup and cone, with in-house quick release skewers (and the Dura Ace ones are exceedingly fine...). 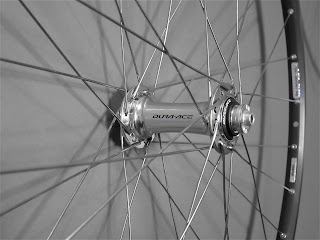 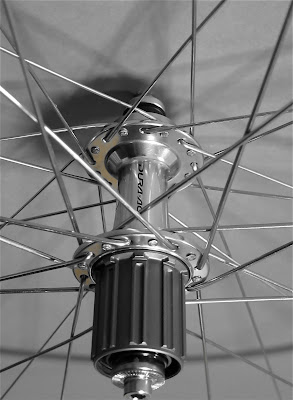 They are a sight to behold, and this vision of beauty has given me great comfort and and unquenchable conviction to return to cycling during my recovery from a Tibial Plateau Fracture.

But kidding aside, one thing Shimano has learned from the great NOS cycling parts glut of the late 90's/early 00's is that it is extremely painful to be hawking your current offerings against the previous 1 or 2 models of the same product that are reduced in price by 50% or more.

So nowadays, Shimano manages their inventories such that within a couple years of introducing a new Dura Ace series, the previous series becomes scarce and, hence, expensive.

What is all this leading up to?  Simple - if you want a shiny silver top end non-boutique cup and cone w/beautiful branded quick release hubset, get your Dura Ace 7900 hubs now.  They are already getting a little scarce, but I just ordered 5 sets from Ribble, who has them on sale for $222 USD for the rear, $111 USD for the front, free shipping.

I got 36 holes to boot, so I can use them for heavily loaded applications.

I think its a industry trying to cheat the consumer by changing the aesthetic to save a couple pennies.

Thick black paint vs polish? Whats easier to put thru the production line? Then that newly changed, black is the new chrome is the standard. Hubs, derailleurs, rims, brakes all of that should be shiny. 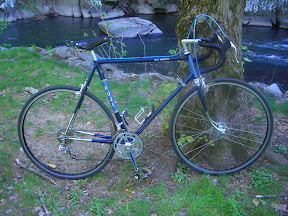